The Importance of CIR Aerial Imagery in Inventory, Monitoring and Predicting Forest Condition

Background and Purpose: The main goal of this paper was to highlight the importance of colour infrared (CIR) aerial photographs for efficient inventory, monitoring and predicting the health status of forests in changed site conditions. CIR aerial photographs from two aerial surveys conducted in 1989 and 2008 were used to identify and analyze the damage in lowland pedunculated oak (Quercus robur L.) forests during each period, as well as to obtain a dieback trend in the observed period.
Material and Methods: The research was conducted in lowland pedunculated oak forests of Josip Kozarac management unit. CIR aerial photographs (1989) of the research area were taken with a classical camera, while aerial images in 2008 were taken with a digital camera and then converted from digital to analogue form (contact copy - photograph) in order to perform photointerpretation with a SOKKIA MS27 Carl ZEISS Jena mirror stereoscope, magnified by 8x. The health status of particular trees (crowns) was assessed by means of photointerpretation keys in a stereomodel over a systematic 100x100 m sample grid on both 1989 and 2008 aerial photographs. The degree of damage of 4 individual trees was assessed at every grid point in the surveying strips covering the surveyed area. Damage indicators were calculated and thematic maps were constructed on the basis of the interpretation of data for all the grid points.
Results: For the research area a damage index (IO) of 68.36% for oak was determined by photointerpreting individual trees (2008); in other words, this percentage of pedunculate oak trees in the surveyed area was found to be in the damage degree of 2.1 and more. Of 68.36% trees classified in the damage degree of 2.1 or more, mean damage (SO1) amounted to 52.16% and could be classified in the damage degree of 2.2. In 1989, the mean damage index (IO) for pedunculate oak was 48.00%, and pedunculate oak trees with mean damage degree of 2.1 or more (SO1) amounted to 36.03%. The comparison of photointerpretation results from 1989 and 2008 shows that the damage index (IO) for pedunculate oak increased by more than 20%, whereas mean damage (SO) rose by almost 15%. An increase of more than 15% in mean damage of considerably damaged pedunculate oak trees can also be observed.
Conclusions: The obtained results provide not only the current forest condition but also indicate the condition in the field and the purposefulness of aerial surveying, since aerial photographs allow an insight into the condition in the field in a short time period. This in turn enables the efficient application of measures to mitigate the consequences of dieback.

A good quality monitoring of forest damage is based on the systematic collection of data on forests in a particular area and at a particular time. In Croatia, monitoring has been effectively performed by observation in the field since 1987, and by interpretation of colour infrared (CIR) aerial photographs since 1988. Pedunculate oak (Quercus robur L.) forests have for a relatively long time been subjected to changes that fundamentally affect their stability, which is directly reflected on their productivity. According to the results of field assessment of forest damage in Croatia (a method prescribed by ICP Forests), considerable damage of pedunculate oak is gradually increasing, making pedunculate oak the most endangered broadleaved species in Croatia [1], [2].

Tree dieback is a complex process that involves a large number of site, stand and biotic factors [3], [4], [5], [6], [7], [8]. The negative consequences are mitigated by monitoring the condition of pedunculate oak trees and by assessing crown damage [9].

According to Kalafadžić and Kušan [15], [16], damage inventories employing aerial photography is based on the assumption that there are explicit differences in the way of mapping between healthy and damaged trees. These differences are conditioned by changes in the spectral system of the reflected solar radiation and by a changed crown shape.

In Croatia, pilot aerial surveys using CIR films [17], [18] were followed by the application of CIR aerial photographs to inventory damage over larger areas since 1988 [15], [16], [19]. Forest damage inventory was used to investigate both the impact of some biotic and abiotic factors on stand damage [20] and the reliability of damage assessment in CIR aerial photographs [10]. Remote sensing methods allow for simple monitoring of changes in the forest condition and identifying new hot spots of tree dieback or other damage. This is particularly important in today’s changed and disturbed ecological conditions as it makes it possible to predict efficient measures for alleviating dieback consequences [21], [22]. Research to date has shown that more attention should be paid to trees damaged by over 25%, because such trees cannot recover any more; in other words, it is assumed that such trees will die before the end of rotation [4].

Initial aerial survey using CIR film were performed in 1989 over lowland forests of pedunculate oak  of Josip Kozarac management unit for the purpose of detecting damage degrees. Since this survey showed all the advantages of photointerpreting CIR aerial photographs for forest damage assessment, the same area was again surveyed 19 years later to monitor the forest condition.

The main goal of this paper was to highlight the importance of CIR aerial photographs for efficient inventory, monitoring and predicting the health status of forests in changed site conditions. For that purpose, CIR aerial photographs from two aerial surveys conducted in 1989 and 2008 were used to identify and analyze the damage in lowland pedunculated oak (Quercus robur L.) forests during each period, as well as to obtain a dieback trend in the observed period.

As already mentioned, the objects of this research were lowland pedunculated oak forests of Josip Kozarac management unit (MU) (Figure 1). 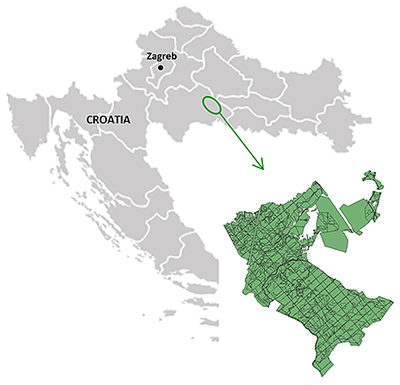 Josip Kozarac MU has an area about 5500 ha, and it is fairly representative of the lowland forests with pedunculate oak and narrow-leaved ash as the main tree species. This  area is located about 5 km south of the Zagreb-Belgrade motorway, near the villages of Kraljevna Velika and Lipovljani, and about 15 km south east of Kutina. The hydrological conditions of these forest ecosystems depend on the River Sava, which is about 5 km south of the facility and its left bank tributaries. The relief is typically lowland, gently rolling, with marked microelevations and micro-depressions, and with the height above sea level being 91-105 m. The age of the forest stands is 105 -150 years.

The area of Josip Kozarac MU was firstly surveyed with CIR film (Kodak Aerochrome 2443) in 1989 using a Zeiss Jena LMK 305/23 camera (f=305.18 mm), providing analogue CIR aerial photographs in the format 23x23 cm and with spatial resolution of 50 cm. The average scale of was 1:6100. Ninety compartments were partially or fully captured in a total of 41 aerial photographs with forward overlaps of 60% and side overlaps of 20-30% collected in 5 strips. The second aerial survey of the same area was conducted in 2008 with a Microsoft UltraCamX digital large-format aerial camera (f=100.5mm). A digital camera was used for the first time for inventory forest damage in Croatian forestry, providing digital CIR aerial images of high spatial resolution (ground sampling distance - GSD). In total, 122 CIR digital aerial images of 10 cm GSD with forward overlaps of 60% and side overlaps of 36% were taken in 12 strips (Figure 2). 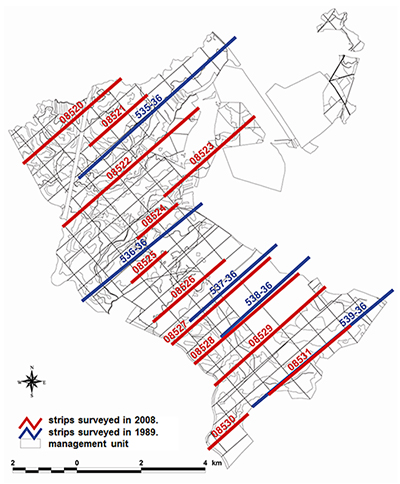 FIGURE 2. Strips surveyed in 1989 and 2008 in Josip Kozarac management unit

For the needs of this research, the images from 2008 were converted from digital to analogue form (contact copy - photograph) in order to perform photointerpretation with a SOKKIA MS27 Carl ZEISS Jena mirror stereoscope, magnified by 8x. The photographs from 1989 were also photointerpreted by means of a mirror stereoscope, but on the table for illumination since the recordings were the original films. 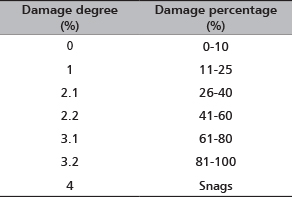 The data for all the grid points were interpreted and damage indicators were calculated according to the following equations [16]:

A more detailed description of damage indicators can be found in Kalafadžić and Kušan [16] and Pernar et al. [14].

In accordance with the acquired results, thematic maps were constructed using ArcGIS 9.2 software in a scale of 1:5000 with spatial distribution of mean damage (SO) and damage index (IO) for the main tree species, and overall for the management units (compartments/subcompartments) in individual recording strips.

Damage indicators for the main tree species (pedunculate oak and narrow-leaved ash) and overall for the management unit were calculated on the basis of the results of CIR aerial photograph interpretation from two surveying periods (Table 2).

A comparison of significant oak damage (IO) from two surveying periods shows that oak damage was higher in 2008, i.e. it rose by about 20% (Table 2, Figure 3). Mean damage of significantly damaged trees also increased (36.03% in 2008, 52.16% in 2008). This is also confirmed by the results of field assessment of forest damage in Croatia (a method prescribed by ICP Forests), stating that significant damage of pedunculate oak has been gradually increasing since 2002, thus making pedunculate oak the most endangered broadleaves species in Croatia [1], [2]. 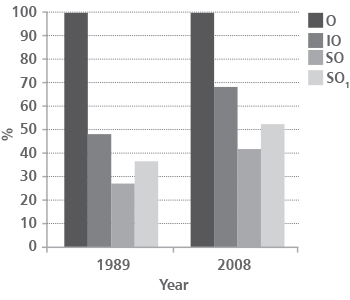 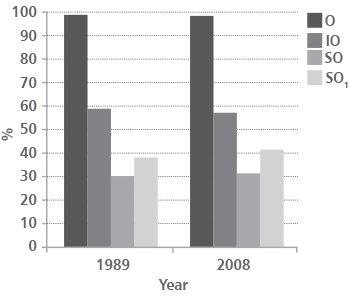 This is also illustrated by mean damage of significantly damaged trees (SO1), which in the case of ash is on a slight rise, unlike mean damage of significantly damaged pedunculate oaks, which rose by about 16%. Consequently, a slightly higher damage percentage in ash is attributed to pest attacks [23], whereas in the case of oak, damage shows continuous rise: unlike ash, the crown structure in oak is also disturbed. If the amount of assimilation organs is decreased, the intensity of radiation reflected from these organs also decreases, forcing other parts of the tree - shoots, branches and stem, to participate in the reflection process [24]. This results in decreased intensity of red colour, which in turn affects the assessment of crown damage. 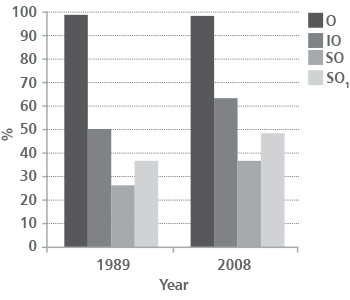 FIGURE 5. Comparison of damage indicators overall for all the interpreted species from two surveying periods

The obtained results of damage detection show distinct oak damage in the surveyed area. Research to date indicates that more attention should be paid to significantly damaged trees, since such trees are hard to recover, or in other words, it is assumed that they will die before the end of rotation. An increasing proportion of sanitary fellings in the annual cuts forces us to pay particular attention to the health status of forests and the amount of unplanned felling: therefore, we also analyzed the delineation selection of the compartments/subcompartments in which photointerpretation of CIR aerial images showed that oak damage exceeded 60%, or in which more than 50% of the trees were significantly damaged (IO), according to the quantity of sanitary fellings. Infrared digital orthophoto (1:5000) was used to inventory (map) more severely damaged trees and snags, whose marking provided spatial distribution in the surveyed area (Figure 6). According to the results, the highest number of trees marked for sanitary fellings were found precisely in the compartments in which photointerpretation revealed the highest damage degrees (2b, 3a, 3b) (Figure 7). 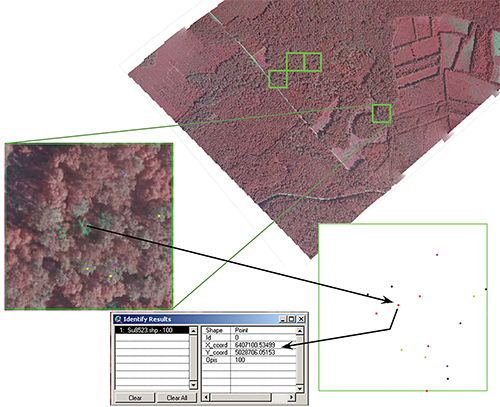 FIGURE 6. Excerpt from a surveying stripe (2008) with mapped trees in 1 ha samples (snags are marked red, and trees in damage degrees 3.1 and 3.2 are marked yellow and purple)

Identifying and monitoring the spatial distribution of damaged trees and snags is one of the priorities of sustainable management [19]. Therefore, timely location of stands of poorer health is necessary so that appropriate measures can be applied to maintain their vitality and productivity at an optimal level. This is enabled by interpretation of CIR aerial photographs. The achieved results provide not only the current forest condition, but also indicate the condition in the field and the purposefulness of aerial surveying. Aerial photographs allow an insight into the field condition in a short time period and enable efficient prediction of measures to alleviate dieback consequences.

The results obtained by photointerpreting CIR images from two periods for the area of Josip Kozarac management unit relate to identifying and analyzing damage in pedunculate forests, as well as obtaining data on the spatial distribution of damage. They serve as a basis for the study of characteristics that affect the health condition of pedunculate oak forests.

The acquired results provide an insight into the condition of pedunculate oak in the surveyed area and can serve as a basis for future planning of this area in changed site conditions. They can also be used to predict future development and assess the probability and pace of dieback.