Background and Purpose: Willows compared with other species are the most suitable for biomass production in short rotations because of their very abundant growth during the first years. Nowadays, in Croatia, a large number of selected and registered willow clones are available. The main objective of the research should be to find genotypes which, with minimum nutrients, will produce the maximum quantity of biomass.
Material and Methods: Clonal test of the arborescent willows include the autochthonous White Willow (Salix alba), interracial hybrids of the autochthonous White Willow and the English ‘cricket’ Willow (S. alba var. calva), interspecies hybrids (S. matsudana × S. alba), as well as multispecies hybrids of willows. Average production of dry biomass (DM∙ha-1∙a-1) per hectare was estimated in regard to the clone, survival, spacing and the number of shoots per stump.
Results: The highest biomass production as well as the best adaptedness and phenotypic stability on testing site was shown by clones (‘V 374’, ‘V 461’, ‘V 578’ from 15.2 - 25.0 t∙DM∙ha-1∙a-1) originated from backcross hybrid S. matsudana × (S. matsudana × S. alba) and by one S. alba clone (‘V 95’, 23.1 - 25.7 t∙DM∙ha-1∙a-1). These clones are now at the stage of registration and these results indicate significant potential for further breeding aimed at biomass production in short rotations.
Conclusions: Willow clones showed high biomass production on marginal sites and dry biomass could be considerably increased with the application of intensive silvicultural and agro technical measures. No nutrition or pest control measures were applied (a practice otherwise widely used in intensive cultivation system), while weed vegetation was regulated only at the earliest age.

Biomass for energy purposes could be produced by fast growing tree species such as willows, poplars, alder, birch, black locust and others. Such a manner of biomass production is known as Short Rotation Forestry. In previous studies in Croatia, arborescent willow clones have shown greatest potential for biomass production in short rotations. Therefore, testing of arborescent willows continued aiming at identification of clones with greatest production potential, particularly on the so called marginal sites i.e. abandoned agricultural soils and/or sites that are not suitable for growing more valuable tree species (Table 1). According to the results of the field and laboratory research, the genetic differentiation of tested clones with respect to biomass production in fresh and dry matter has been determined [1], [2]. 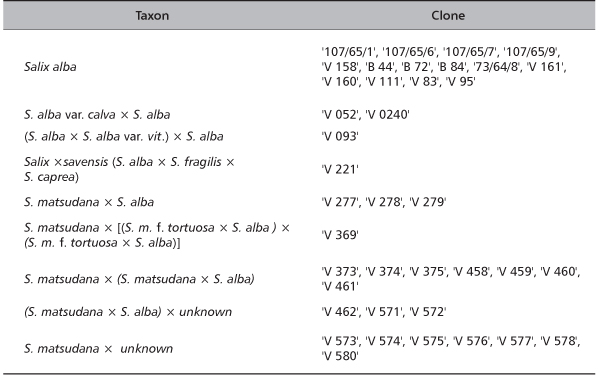 The strategic interest of every country is to increase the level of its energy independence. The only path towards achieving this goal is to test the possibilities of using alternative energy sources. Among alternative energy sources, the so-called renewable energy sources and their advantages in terms of environment protection and sustainable development attract particular attention. By signing certain agreements (e.g. the Kyoto Protocol), the majority of European countries have committed themselves to taking concrete steps in increasing the share of renewable energy sources of the total energy balance.

Biomass is a renewable energy source with the highest potential in Croatia. The national BIOEN program [3], [4] was initiated with the aim of promoting the use of bioenergy for energy purposes. Both Europe and Croatia are faced with the problems of agricultural production of low profitability on marginal and abandoned soils. More recently, such production has additionally been aggravated by adverse climatic changes, soil and water pollution, lack of energy and depopulation in areas with dominant extensive agricultural production. Short Rotation Forestry (SRF) and biomass production follow world trends and aim to put renewable energy sources to better use without generating additional quantities of CO2, otherwise largely present in fossil fuels.

Biomass of forest tree species can also be produced by intensive cultivation of fast-growing species in SRF. The basic function is the production of biomass as a renewable and ecologically acceptable energy source. However, these species can also be an alternative “agro” culture (in poorer sites), or they can act as agricultural soil diversifiers, as well as provide the possibility of ecologically more acceptable methods of waste water and phytoremediation. In addition, they sequester increased quantities of atmospheric carbon dioxide [5], [6].

In recent research, clones of arborescent willows manifested the highest biomass production potential in short rotations of up to ten years on marginal (clay type of soil, reed habitat), but particularly on optimal soils [1], [7], [8], [9], [10], [11], [12], [13]. Tests of different arborescent willow clones continued with the purpose of identifying those with the highest biomass production potential, quality and calorific value, especially on so-called marginal soils [14], [15], [16], [17].

A field trial with ten White Willow (Salix alba L.) clones and hybrids with Chinese Willows (Salix matsudana Koidz.) was established with cuttings in the area of Valpovo Forest Office, in the eastern part of Croatia (FT1) on a more optimal site within the nursery. At ramets age at 2/3 and 2/5 years, breast diameters and heights were measured, survival and the number of shoots per tree stump was identified.

Tests were established according to the randomized block system design in four repetitions. Each clone is represented with at least 30 ramets planted in 1.3 × 0.8 m spacing. The offshoots were cut, biomass was measured and evaluated on two-year-old sprouts, and the survival of the tested clones was determined. In the year of test establishment, as well as after the first cutting, weed vegetation was mechanically regulated.

All two-year-old shoots from the same stump were cut in each repetition and their weight in fresh condition was measured. Mass samples of 0.5 kg were collected randomly from the cut shoots, separately for each clone. The samples were dried at 105ºC until constant mass was achieved. The ratio between fresh and dried matter sample was used to determine the average shares of moisture in the wood of each clone. These were then used to assess dry biomass of cut shoots (t∙DM∙ha-1∙a-1). Breast diameters and dry biomass of cut shoots were equalized by means of a non-linear regression method. Then, using the obtained regression models (for each clone separately) and the previously measured breast diameters, dry biomass of each particular shoot in the tests was assessed. The production of clone biomass per hectare was assessed in relation to the value of dry biomass of mean shoot, survival, distance between the ramets and the average number of shoots per root.

The data obtained from the measurements were processed by means of descriptive statistical analysis to determine the average, minimal, and maximal values, as well as standard deviations for the investigated properties. All statistical analysis and analysis of variance were performed using the software package Microsoft Office Excel.

Non-linear regression analysis was used to assess dry biomass of particular shoots according to the following equation [18]:

- a, b, c - parameters assessed on the basis of the shoot sample cut in one repetition.

Rank correlation was calculated by formula: 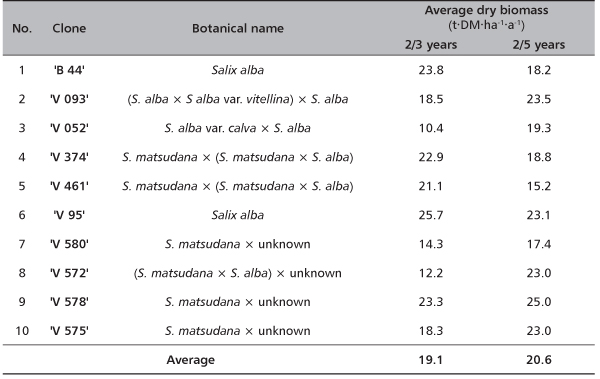 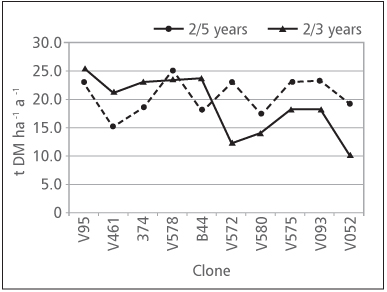 Analysis of variance showed that biomass production in both rotation periods (age 2/3 and 2/5 years) didn’t show significant genotypic differences in biomass production (F=1.93, F=1.94). Greater clonal differentiation can be expected at older plantation ages (e.g. at the third or fourth rotation). According to earlier investigations biomass production of all the investigated willow clones shows a different trend in proportion with the test age, except in few clones, in which, after the initial increase, a decrease in the production was recorded between the second and the third rotation [9], [12], [13].

Among all the studied clones, the clones ‘V 374’, ‘V 461’, ‘V 95’, ‘V 578’ are singled out in terms of their excellent adaptedness to the habitat and to developmental conditions. In addition, they display above-average values of dry biomass of the mean shoot, or total biomass production, as well as sprouting ability. In these experiments and in two rotations, the best phenotypic stability and steady production were manifested by clones, ‘V 374’ and ‘V 461’, which originated from backcross hybrids  S. matsudana × (S. matsudana × S .alba), ‘V 578’ (S. matsudana × unknown) and by White Willow clone ‘V 95’ (S. alba). With their average production in two-year rotations varying between 15.2 and 25.7 t∙DM∙ha-1∙a-1, they manifested considerable potential for dry wood biomass production on heavy clay type of soils and marginal lands. These clones, with regard to the partial application of agro technical measures could achieved exceptional production and phenotypically represent highly unstable clones of high productivity with specific adaptability to optimal sites. Highly productive pioneer species are grown as monoculture plantations in short rotations. Short duration rotation coppice (SRC) system with willow and short duration rotation single stem (SRSS) systems with poplar species on very suitable soils in Eastern Europe at the age of 5 years results with the productivity of 13.8 to 18.1 t∙ha−1∙DM for willow and poplars and from 17.7 - 21.8 t∙ha−1∙DM for Miscanthus [19].

Short rotation coppices with clones of arborescent willows were established on so-called marginal sites, i.e. on abandoned agricultural soils or soils not suitable for the cultivation of more valuable forest tree species. No nutrition or pest control measures were applied (a practice otherwise widely used in intensive cultivation system), while weed vegetation was regulated only at the earliest age. Despite this, the results showed relatively high biomass production of the studied clones. Average dry biomass production of the studied clones at age 2/3 years was 19.1 and in the second two-year rotation at the age 2/5 years it was 20.6 DM∙ha-1∙a-1. The highest production was manifested by the clones that taxonomically belong to different crossing combinations of Chinese and White Willow and perspective and phenotypically more unstable clones showed average production of more than 20.0 t∙DM∙ha-1∙a-1.

From the results obtained it can be seen that the possibilities of biomass production with the selected arborescent willow clones in Croatia are optimal with regard to the stand production potential and selected genotype assortment. The biomass production can be improved considerably by fertilization which, however, can be avoided by proper selection of clones with low nutrient requirements. In order to increase biomass production, silvicultural measures should be applied so as to reduce the number of shoots to one to two per stump, while production on marginal sites could be considerably increased with the application of intensive silvicultural and agro technical measures.