The 70th Anniversary of the Croatian Forest Research Institute (1945-2015)

The Croatian Forest Research Institute, one of the founders and publishers of the South-east European forestry (SEEFOR) journal, this year celebrates its 70th anniversary. The celebration of this anniversary in fact marks the beginning of the development of the institutions of scientific research in forestry in the Republic of Croatia (1945-2015), and it follows the 250th anniversary of the establishment of first forestry offices in Croatia. Although the first scientific research in the Croatian forestry was undertaken as far as in 1860, with the establishment of the Higher Forest and Management School in Križevci, only after the end of the Second World War (1945) did the Ministry of Agriculture and Forestry in Croatia start with the organization of the forestry service and research. The earliest document that shows the existence of a research institution is the Decree of the Ministry of Agriculture and Forestry, in which Zlatko Vajda, PhD was appointed an officer of 5th order in the Department of Practical Forest Research. In 1950, the main administration of forestry in Peoples Republic of Croatia became the new founder and it changed the name into the Institute for Forestry and Game Research. In 1962 the University of Zagreb decided to include the Institute as a part of the Faculty of Forestry in Zagreb, and changed its name into the Institute of Forestry Research. It was active under this name until 1968, when the name was changed into the Institute for Forestry Research in the Socialist Republic of Croatia. The agriculture and forestry chamber of the PR of Croatia on 28th March 1959 in Rijeka founded the Forest Seeds Control Department, and on 11th June 1960 in Jastrebarsko founded the Institute for Conifers, whose name was in 1964 changed into the Yugoslav Institute for Conifers. All three of the established scientific institutes- the Institute for Forestry Research in Zagreb, the Forest Seeds Control Department in Rijeka and the Yugoslav Institute for Conifers in Jastrebarsko -were in 1974 united into the Forest Research Institute, Jastrebarsko.

The Forest Research Institute in Jastrebarsko as a scientific-research organization, with the introduction of the Public Institutions Act (NN 76/92) became a public institution for which the republic of Croatia acquired the founding rights, and with the Scientific Research Acts Law (NN 96/93) it continued with its work as a public scientific institute and a property of Croatia. With the further development including the establishment of the Research Centres in Vinkovci, Varaždin and Pazin, it changed its name into the Croatian Forest Research Institute (2009).

During the last 70 years, the scientific institutions in Croatian forestry changed their structures, names and headquarters, but their fundamental goals, their role and their importance in the forestry remained the same: the development of forest science and the intensification of scientific findings in forestry, also closely connected to the operational forestry in the implementation of the results of research, as well as the improvement of management, protection and regeneration of forests and the preservation of biological diversity in forests, the development and the specialization of young scientists and researchers, cooperation with Croatian and foreign institutions and organizations, the investment in buildings and the purchase of new scientific equipment, the advancement of publishing and the international visibility of scientific results, and the popularization of science and forestry in the society.

This whole period will only formally be divided into several sub periods starting directly after the end of the Second World Ward, when the first institutions were established. At that time, experienced experts soon to be retired were working at the Institute and operational forestry was undertaking great harvesting activities, because of the restoration and industrialization. The experts from the Institute solved the ongoing problems in the operational forestry and largely contributed to the development of post-war forestry. Even though the scientific plans were modest, 22 books were published in that period. What followed was the period from 1950 to 1960, characterized by new problems in the forest tending, the expansion of conifers’ area of distribution and the intensification of the production of planting material. The way of funding the Institute was improved, new young assistants were employed, and programmes for long-term research were made. The next period lasting until 1974 brought changes, including the direct connection to the operational forestry by directly funding scientific research. When making medium-term research plans, along with the Fund for Scientific Work, operational forestry also took part, through the Business Association and directly. The projects and tasks became more complex and research was conducted on: sylvicultural properties of forest trees, forest protection, soil, vegetation, improvement of forest seed husbandry and nursery production, the zoning of seed areas, physiology and nutrition, genetics and the breeding of forest trees, the forest types, and the rationalization of work. Young staff were specialized in Croatia as well as abroad. The uniting of three institutes at the beginning of 1974 brought the stabilization of funding and of scientific topics, which were dealt with at the Institute with more detail. Applied and scientific projects were successfully contracted and the publication of the results increased. Until 1990, the Institute primarily worked on broadening of the distribution area, the improvement of the establishment of conifer forest cultures and plantations, and researching the natural regeneration of forests, along with the development of physiology and nutrition, forest tree breeding and undertaking typological research. The rapid development of research topics and the specialization of scientists was stopped on 10 February 1998, when Nikola Komlenović PhD, scientific advisor, Branimir Mayer PhD (scientific advisor), Petar Rastovski PhD (scientific advisor), Zlatko Perić MSc (scientific assistant), Goran Bušić MSc (scientific assistant), and prof. Ante Krstinić PhD, a professor at the Faculty of Forestry in Zagreb, were killed in a car accident. Great changes had to be made within the main researchers and it was almost impossible to fill the gap that was created. Only about ten years later with the improvement of young researchers who came to the Institute after the accident was it possible to continue with all of the research and ensure the new progress. In all of the next competitions for projects by the Ministry of Education the Institute ensured a sufficient number of projects. Equally successful were the research programmes and numerous projects as a part of the Programme of Scientific and Research Work in Croatian Forests funded by the General Forests’ Benefits Fund (OKFŠ).

In the next period, the system of funding the projects by the Ministry of Education, Technology and IT was significantly improved, and until 1995 the Institute led 14 scientific projects. After that, in the period up until 2005, while continuing with the development of the methods of research, the new subjects were included, such as the research in protected areas (national and nature parks), and the improvement of biomass production in Croatian forests, but also the research of Mediterranean forests. Therefore the project “The Growth and Development of Special Purpose Forests” was one among the 7 projects funded by the Ministry of Science, Technology and IT. What followed was the initiative of regional development , together with the Ministry of Science, Education and Sports, Croatian Forests , local government, counties, towns and municipalities, established the Research Centre for Lowland Forests in Vinkovci, the Research Centre for Private and Urban Forests in Varaždin, and the “Josip Ressel” Research Centre for General Forests’ Benefits in Pazin. This was the response to the request by operational forestry for connecting the research with its intensifying, but also to the attempts of the Ministry of Science, Education and Sports to enable the employment of young scientists outside of Zagreb.

The Croatian Forestry Institute is today the leading scientific research institution in the field of forestry in Croatia. It has developed a good and long-lasting collaboration with a number of prestigious institutes from several European countries (Austria, Germany, France, Spain, Denmark and Finland), and with countries from the region (Slovenia, Serbia, Slovakia, Bosnia and Herzegovina, Hungary, Macedonia, Montenegro and Albania). The Institute is a member of IUFRO organization, as well as of the European Forestry Institute, and hosts its regional office for southeast Europe hosts as Department for International Scientific Cooperation EFISEE. It is also a member of ELI Institute for Ecology, and EVOLTREE network for the research of the adaption of forest trees to climate changes.

The Institute is organized in six Research Divisions (Figure 1), three Regional Research Centres and two Departments (Common Affairs Services and Department for Nursery Production), five laboratories are organized in one inter-division accredited Department for Laboratory Research. The Institute has 88 employees, 22 of which are PhDs. In its nursery covering 22 ha and in the two greenhouses the Institute grows ornamental plants, and undertakes field research for the needs of scientific projects. 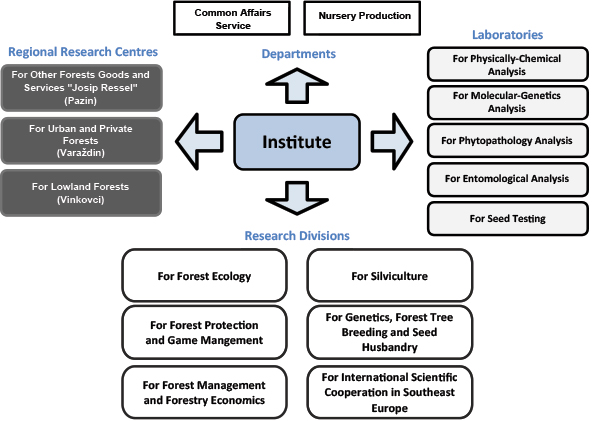 The Institute publishes two scientific journals: Radovi (http://www.sumins.hr/radovi/) and So-uth-east European forestry, established by the international contract between eight faculties and institutes of forestry in the region (www.seefor.eu).

For already five years the Institute has organized The Open Days, covering various diffe-rent topics: Our Forests, Urban Forests, Forests and Water, Forests and Health and Forests and Fire. On that one day up to 800 children of different ages visit the Institute, where they are taught about science and forestry in a popular and entertaining way.

Based on the Development Strategy, the Croatian Forest Research Institute passed a subject-based evaluation for 2013-2020, as well as the process of reaccreditation, with excellent results, which confirmed it to be one of the four best scientific institutes in Croatia. The Institute has been carrying out four projects of Croatian Scientific Foundation (2014-2017): Estimating and Forecasting Forest Ecosystem Productivity by Integrating Field Measurements, Remote Sensing and Modelling (EFFEctivity), Advanced Forest Environmental Services Assessment (AFORENSA), Conservation of genetic resources of forest trees in light of climate changes (CONFORCLIM), and Defoliators as invasive forest pests in changing climate conditions (DIFPEST), because of which three new PhD candidates and one post-PhD candidate were employed.

An important feature of the Institute’s role are the projects, which are continuously aimed for professional use, the Ministry of Agriculture, Administration for Forestry, hunting and wood industry, which in this period have acquired their legal foundation. Those are Diagnostic and prognostic service for forest pests (IPP), Monitoring of Damage to Forest Ecosystems (ICP), the Survey of Quarantine Pests, the Seed Bank (SJEMŠTED), and the Forest Trees’ Genes Bank (GENBANK). Within these projects, the laboratories were renovated and equipped, and the building of the Seed Bank was built, in which the seeds of economically most valuable forest trees’ species in Croatia are kept.